about the “sound in space” 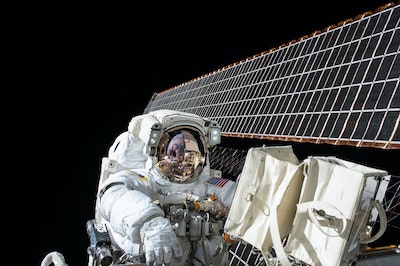 You need some “material” to let sound travel – and there is nothing in space – so there is no sound in space – none at all. Contrary to most science-fiction-films where the science-part is mostly wrong anyway 😉

Very few productions are realistic or try to be realistic – and many films just need all the explosions and weapons – otherwise it wouldn’t be very impressive. One of the most recent films with a realistic approach was “Gravity” – you could only hear any sound inside the space-suit – the sound the character would really hear – mostly breathing, talking, intercom, the space-suit itself and maybe the actors stomach – if he/she is hungry.

A very good example for the very realistic sound in a science-fiction-production is “2001 – a space odyssey” by director Stanley Kubrick (he is always very realistic, see “Full Metal Jacket” or my comments about the speed of sound here). Not only will you hear no sound in space, you will hear sound in space-suits but one more complex scene is also correct: David Bowman in his EVA-pod (a very little space-ship for service/repair), blocked out by HAL from the main space-ship Discovery, tries to get back into Discovery with a trick (he would soon die of oxygen shortage otherwise). Dave “shoots” himself (with air-pressure from the EVA-pod) into a docking-station from the Discovery, closes the electric door (you still hear nothing, he also closes his eyes for safety because of the missing air-pressure) and as soon the door is closed air is released into the docking-station. Thats where the sound is coming back – everything before was silent.

This entry was posted in filmsound, realistic sound, sounddesign. Bookmark the permalink.